If you’ve heard of the Boom Pilates and you’re curious to give it a try, it’s likely you’re also asking yourself: exactly what is Pilates?

So, what is Pilates? In short: Pilates is life. Pilates is everything! (OK, maybe we’re biased.) 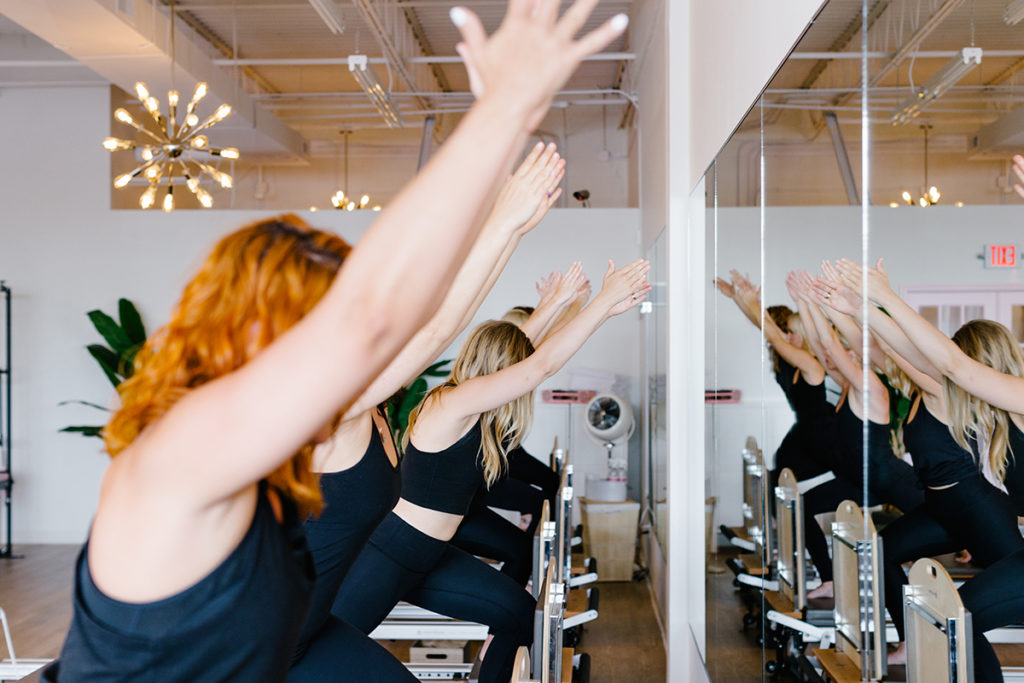 The longer answer is: Pilates is a method of physical exercise developed by Joseph Pilates in the early 20th century. Pilates focuses on a bunch of different goals and benefits, including:

If that doesn’t quite answer your question, don’t worry. We’re about to dive into what Pilates is, how modern Pilates came to be, some different methods of Pilates and yoga and so much more.

Who is Joseph Pilates? 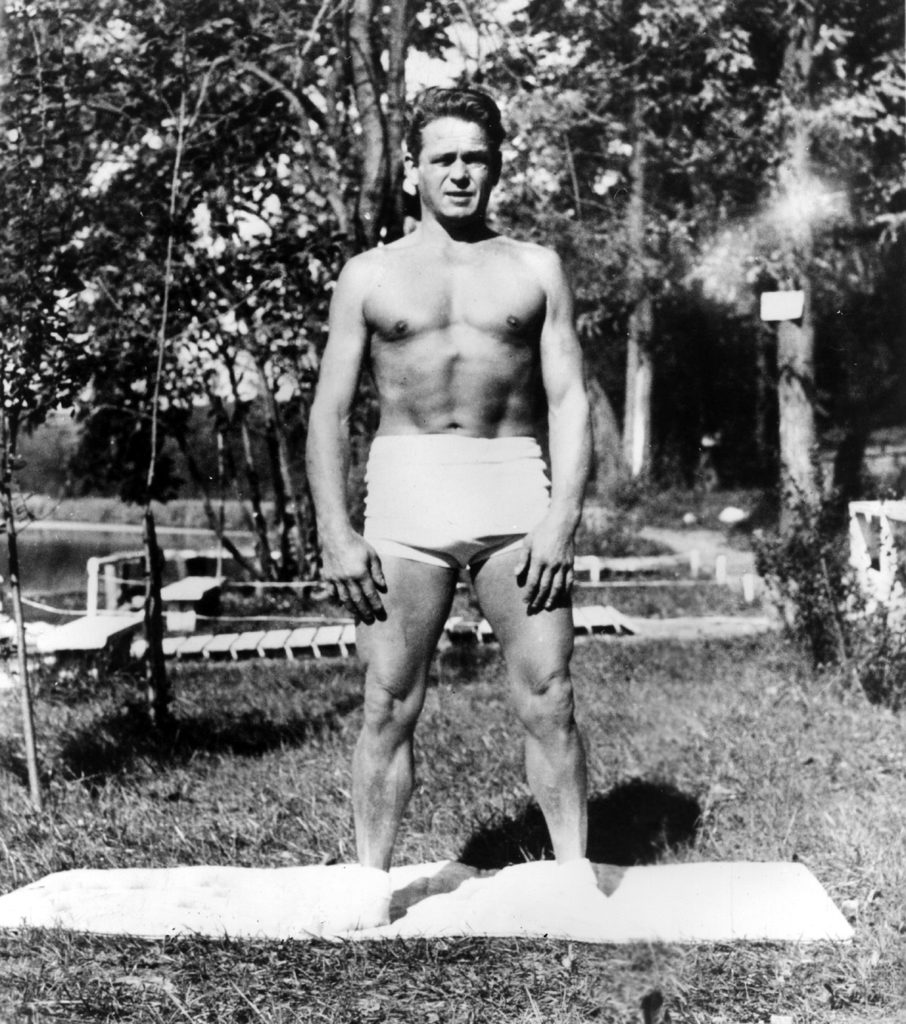 Joseph Pilates was a German physical trainer who invented the exercise methods we now know as Pilates. Joseph Pilates believed that “physical fitness is the attainment and maintenance of a uniformly developed body with a sound mind fully capable of naturally, easily and satisfactorily performing our many and varied tasks with spontaneous zest and pleasure,” and this, in part, is what drove him to create Pilates.

As a child, Pilates struggled with a number of different physical ailments, including asthma, rickets and rheumatic fever. Because of this, he decided at a young age to dedicate his life to improving his physical strength (and, soon afterward, the physical strength of others). Pilates’s father was a gymnast, and he introduced his son to gymnastics, bodybuilding and martial arts such as ju-jitsu and boxing. By the age of 14, he was fit enough to pose for anatomical charts.

Pilates continued to practice gymnastics and bodybuilding into his 20s, and, in his early 30s, actually earned a living working as a professional boxer, circus performer and a self-defense trainer at police schools and Scotland Yard.

During WWI, Pilates was interned with other German citizens by British authorities. Inside the internment camp, Pilates taught the other prisoners self-defense and wrestling. While interned, Pilates was essentially refining and teaching what would become his methods for Pilates to more than 24,000 inmates.

During the latter part of the war, Pilates served as an orderly in a hospital and worked to rehabilitate injured veterans. At one point, he decided to attach bed springs to the hospital beds to better support the patients he was rehabilitating, which lead to the development of what would become the Pilates reformer.

While developing the methods and techniques we now know as Pilates, Pilates himself referred to these methods as “Contrology.” He called it “Contrology” because he wanted to encourage the use of the mind to control muscles, focusing on core postural muscles that help keep the body balanced and provide support for the spine with a focus on breath, alignment of the spine, torso strength and abdominal muscles. In developing these techniques, he studied yoga and the movements of animals, the influences of both we can still see in modern Pilates.

After WWI, Pilates was repatriated to Germany and continued to refine his methods, collaborating with other experts in dance and physical exercise. He was recruited to help train German military police, but after realizing that Germany was rebuilding its military in preparation for WWII, he immigrated to the U.S. Pilates’s brother, who was living in Boom Pilates’s very own St. Louis, helped Joseph refine his equipment, including what would later become the Pilates reformer and Cadillac.

Eventually, Pilates and his wife Clara opened a studio in New York City and directly taught Pilates’s methods. The dance and performing arts community in NY became close followers of the studio, gravitating toward the method especially as an aid in injury recovery and refine technique. As soon as word spread that ballerinas were studying at the studio, New York society women quickly followed suit, and Pilates began to take off.

Clara and Joseph taught Pilates, which was still referred to as contrology at this point, into the late 60s, up until Joseph’s death in 1967. After Joseph’s death, the methods formerly known as contrology became Pilates, and the original Pilates studio continued to operate under one of Joseph and Clara’s ballerina protégés. The studio is still open today.

What is the difference between Pilates and yoga?

Yoga and Pilates are frequently grouped together and discussed as if they were interchangeable, but this isn’t really the case. While there are a few key differences between the two, there’s also some overlap.

This overlap is due, in part, because Pilates has a strong foundation in yoga. As mentioned above, Joseph Pilates drew inspiration from yoga practice and methods and incorporated similar methodologies and goals, especially in the development of mat Pilates, which is the most similar to yoga in terms of equipment, movements and poses. Both also share strong focuses on coordination, breath, strength, alignment, mind-body wellness, balance, mobility, flexibility and body weight resistance training, among other things. Both are wonderful for toning and strengthening the body, and both have multiple styles of practice. Both yoga and Pilates are done barefoot (or with special footwear, such as Pilates or yoga socks). Both can incorporate more elements of cardio through increased speeds and repetitions and the pace at which the class is taught.

If you’ve taken a yoga class before you take your first Pilates class, you’ll probably be able to spot some differences in the ways the classes are taught, especially if you take an equipment Pilates class. Compared to yoga, Pilates places extra focus on exercising the whole body, primarily drawing strength from the body’s core. This focus on strengthening the core, as well as the mind, was a major concentration of Pilates as he came to develop his methods.

While some of the movements in yoga and Pilates can seem similar, poses are typically held for longer periods of time in yoga, while Pilates focuses on shorter movements and repetitions. Additionally, guided meditation is a key aspect of most yoga practices, which is something you don’t always see represented in Pilates. Pilates also uses more varied and advanced equipment and machines to augment the practice. Yoga can occasionally involve additional equipment, such as straps or blocks, but typically these are used just to enhance standard mat practice.

Ultimately, the difference between Pilates and yoga practice is up to you, and the best way to determine whether yoga or Pilates is right for you is to try them both and try different methods of each. While Pilates and yoga share some similarities in their goals, methods and movement, it’s up to you to pick which method suits your specific goals and needs best. You might even find that practicing both Pilates and yoga provides you with a balance of full-body workouts and a chance to connect to your core and your mind.

While both Pilates and yoga can be useful for physical therapy, if you have specific health issues or pain points you hope to address in your yoga or Pilates journey, it’s important to consult with your doctor before beginning either. Consulting with your doctor is recommended whenever you begin a new fitness routine, but it will be especially helpful and necessary if you do have specific pain points you want to address.

What is mat Pilates? 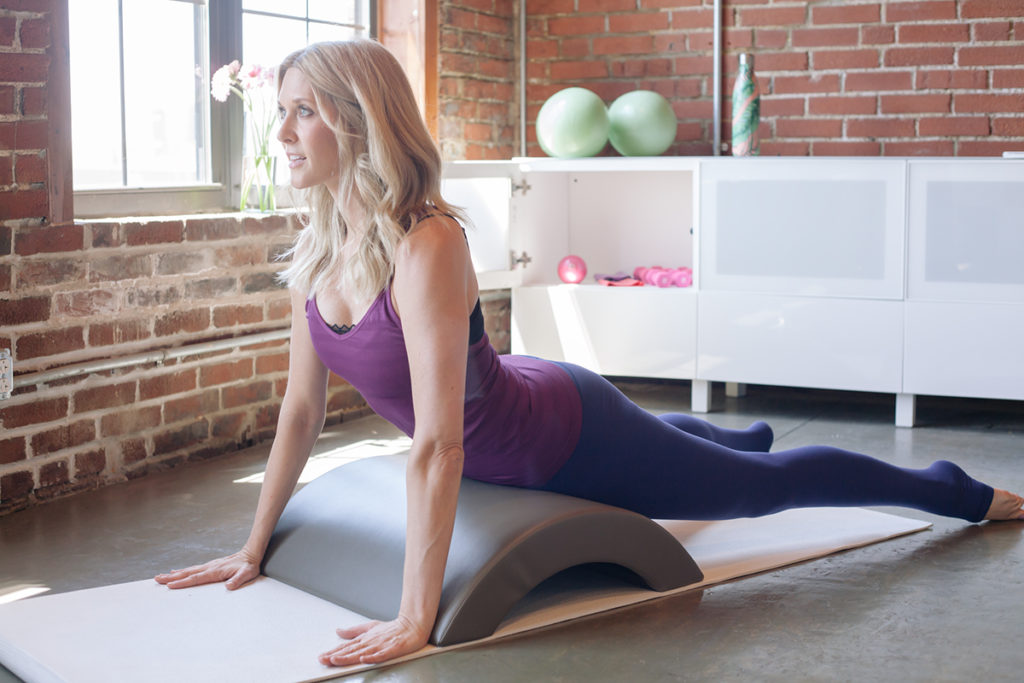 You might be tempted to first begin your Pilates journey at home, with available at-home mat Pilates resources like online classes or tutorials. However, without any experience, the guidance of an instructor or the assistance of Pilates equipment, mat Pilates can easily be practiced incorrectly, with improper form, and having proper form is essential in Pilates. Pilates is only successful when it helps you use your body in the right ways, with the right amount of stress and focus on certain muscle groups. Without that control, you could potentially injure yourself or exacerbate existing injuries.

We’re not saying “don’t try this at home”⁠—in fact, practicing mat Pilates at home is a great way to supplement in between studio Pilates classes. But before you practice at home, make sure you learn the fundamentals with close instructor guidance first.

How is a Pilates reformer used? 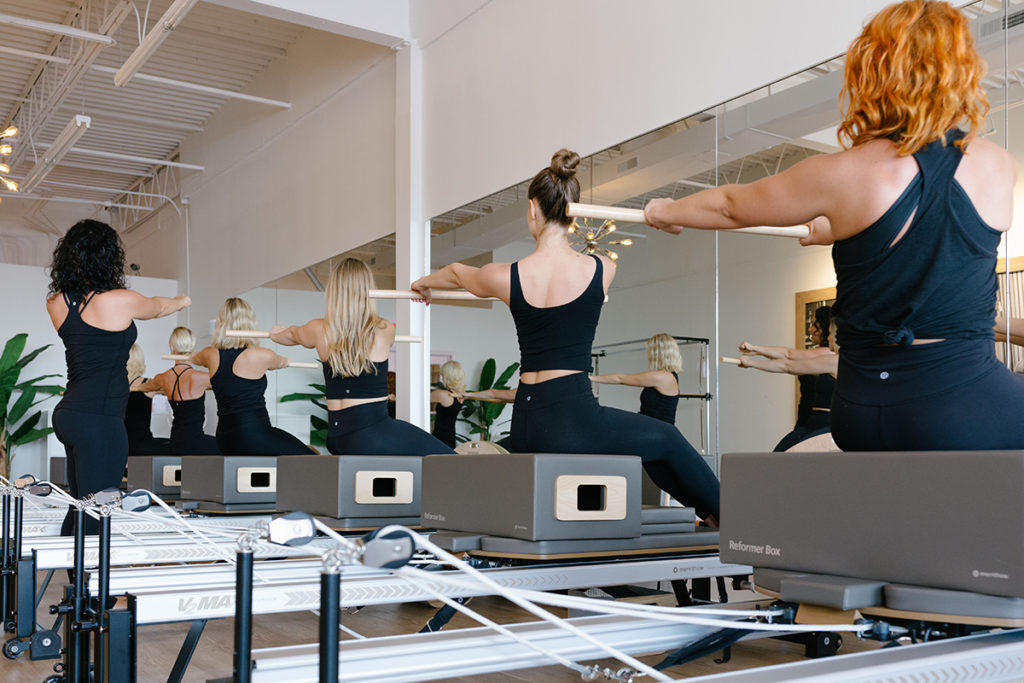 The Pilates reformer is one of the most popular pieces of Pilates equipment, and it’s likely what you’ll see utilized most often in Pilates studios. This Pilates classic operates using a movable platform (called the “carriage”) on wheels in a frame attached to springs and a rope and pulley system. The springs are attached or detached to the carriage in order to add or remove additional resistance when moving the carriage. Additional springs on the reformer contribute to a more intense resistance or necessary stability when doing Pilates, and the carriage’s instability at lower levels of resistance can encourage the development of a stronger core and better balance, two key components of Pilates.

One of the reasons the reformer is so popular is that the machine is designed to aid students in keeping proper form throughout different moves. In order to perform different moves correctly (and, sometimes, to perform them at all) and avoid injury, you have to have proper form. Unlike other methods of exercise, including other Pilates methods, it’s hard to “cheat” on the reformer. And not being able to “cheat” ensures you’re getting the most out of your Pilates class, and that you’re protecting your body by using the proper form.

In addition to encouraging proper form, the reformer is preferred because it’s easy to adapt different moves and parts of the Pilates practice to suit different experience and strength levels and goals. With the springs, the machine’s level of resistance can be adjusted to be more or less challenging for students at different levels, allowing the reformer to be suited to a wide audience of Pilates practitioners.

While the basic setup of the reformer allows for a variety of different full-body movements, additional pieces of equipment, including the reformer box, ring, pole, foot bar and jump board, expand the possibilities even further.

What is Pilates good for?

As we’ve mentioned throughout this blog, Pilates is good for a variety of people with different goals, health concerns and fitness levels. It’s a wonderful form of full-body exercise with a primary focus on strengthening, lengthening and toning. Pilates can also contribute to increased flexibility and joint mobility, as well as better posture, balance and coordination. While it’s primarily a form of resistance training and bodyweight exercises, Pilates classes can be taught at certain speeds and paces to provide a form of cardio exercise as well. With Pilates, you can expect to gain strength in your core, your arms and legs, and likely a few muscles you didn’t even know existed!

While Pilates makes a great addition to anyone’s fitness routine, Pilates, from its very foundations up through the present, was structured specifically to aid in injury recovery and assist those who have special pain points or difficulties to consider whenever they pursue physical exercise. Joseph Pilates developed his methods in part to assist those who were recovering from injury, be they dancers and athletes or veterans rehabilitating from military service. Regardless of your fitness level, Pilates is highly modifiable and, with the right instructor and personalized focus, perfect for a variety of physical difficulties.

So, whether you aspire to be like the ballerinas and dancers who originally studied under Joseph Pilates at his first studio, are an athlete focused on staying conditioned for your sport or are just looking for a low-impact way to stay active, BPL is likely right for you!

Hopefully we’ve successfully answered the question of “what is Pilates” and you’re ready to kick start your own Pilates journey. However, if you’ve come to the end of this blog and you still have a few burning questions, reach out to the BPL team and we’d be happy to share some knowledge!

Ready to put some Boom in your life?